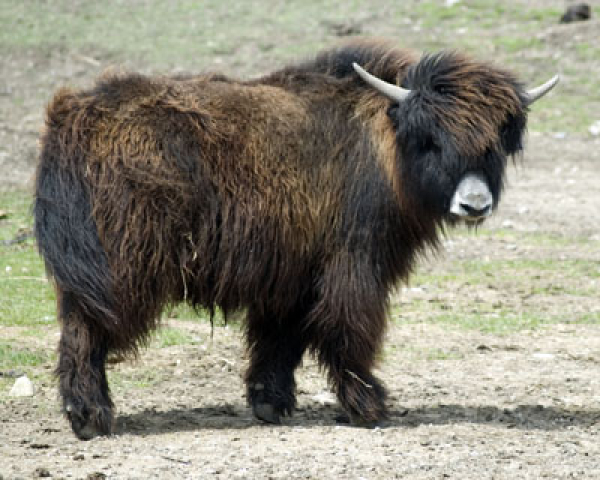 Yaks are heavily built animals with a bulky frame, sturdy legs, and rounded cloven hooves. They are the only wild bovids of this size with extremely dense, long fur that hangs down lower than the belly. Wild yaks are generally dark, blackish to brown, in colouration. However, domestic yaks can be quite variable in colour, often having patches of rusty brown and cream. They have small ears and a wide forehead, with smooth horns that are generally dark in colour. In males, the horns sweep out from the sides of the head, and then curve forward; they typically range from 48 to 99 cm (19 to 39 in) in length. The horns of females are smaller, only 27 to 64 cm (11 to 25 in) in length, and have a more upright shape. Both sexes have a short neck with a pronounced hump over the shoulders, although this is larger and more visible in males.Yaks are highly friendly in nature and can easily be trained. There has been very little documented aggression from yaks towards human beings, although mothers can be extremely protective of their young and will bluff charge if they feel threatened.

Both sexes have long shaggy hair with a dense woolly undercoat over the chest, flanks, and thighs to insulate them from the cold. Especially in males, this may form a long "skirt" that can reach the ground. The tail is long and horselike rather than tufted like the tails of cattle or bison. Wild yaks typically have black or dark brown hair over most of the body, with a greyish muzzle, although some wild golden-brown individuals have been reported. Wild yaks with gold coloured hair, known as Wild Golden Yak is considered an endangered subspecies by China, with an estimated population of 170 left in the wild. Domesticated yaks have a wider range of coat colours, with some individuals being white, grey, brown, roan or piebald. The udder in females and the scrotum in males are small and hairy, as protection against the cold. Females have four teats. -Wikipedia