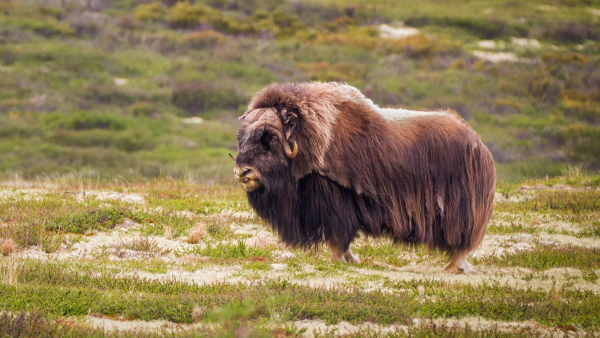 The modern muskox is the last member of a line of ovibovines that first evolved in temperate regions of Asia and adapted to a cold tundra environment late in its evolutionary history. Muskoxen ancestors with sheep-like high-positioned horns (horn cores being mostly over the plane of the frontal bones, rather than below them as in modern muskoxen) first left the temperate forests for the developing grasslands of Central Asia during the Pliocene, expanding into Siberia and the rest of northern Eurasia. Later migration waves of Asian ungulates that included high-horned muskoxen reached Europe and North America during the first half of the Pleistocene. The first well known muskox, the "shrub-ox" Euceratherium, crossed to North America over an early version of the Bering Land Bridge two million years ago and prospered in the American southwest and Mexico. Euceratherium was larger yet more lightly built than modern muskoxen, looking like a giant sheep with massive horns, and preferred hilly grasslands. - Wikipedia