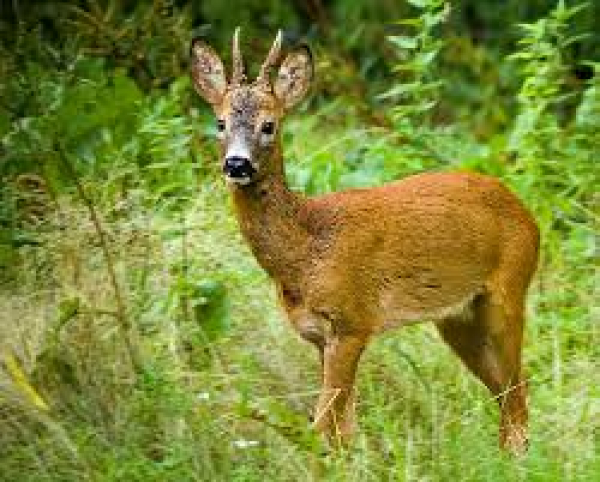 The roe deer is a relatively small deer, with a body length of 95–135 cm (3.1–4.4 ft), a shoulder height of 65–75 cm (2.1–2.5 ft), and a weight of 15–35 kg (33–77 lb). Bucks in good conditions develop antlers up to 20–25 cm (8–10 in) long with two or three, rarely even four, points. When the male's antlers begin to regrow, they are covered in a thin layer of velvet-like fur which disappears later on after the hair's blood supply is lost. Males may speed up the process by rubbing their antlers on trees, so that their antlers are hard and stiff for the duels during the mating season. Unlike most cervids, roe deer begin regrowing antlers almost immediately after they are shed.

The roe deer is primarily crepuscular, very quick and graceful, and lives in woods, although it may venture into grasslands and sparse forests. They feed mainly on grass, leaves, berries, and young shoots. They particularly like very young, tender grass with a high moisture content, i.e., grass that has received rain the day before. Roe deer will not generally venture into a field that has had or has livestock (sheep, cattle) in it because the livestock make the grass unclean. A pioneer species commonly associated with biotic communities at an early stage of succession, during the Neolithic period in Europe, the roe deer was abundant, taking advantage of areas of forest or woodland cleared by Neolithic farmers.

The roe deer attains a maximum lifespan (in the wild) of 10 years. When alarmed, it will bark a sound much like a dog and flash out its white rump patch. Rump patches differ between the sexes, with the white rump patches heart-shaped on females and kidney-shaped on males. Males may also bark or make a low grunting noise. Females (does) make a high-pitched "pheep" whine to attract males during the rut (breeding season) in July and August. Initially, the female goes looking for a mate and commonly lures the buck back into her territory before mating. The roe deer is territorial, and while the territories of a male and a female might overlap, other roe deer of the same sex are excluded unless they are the doe's offspring of that year.