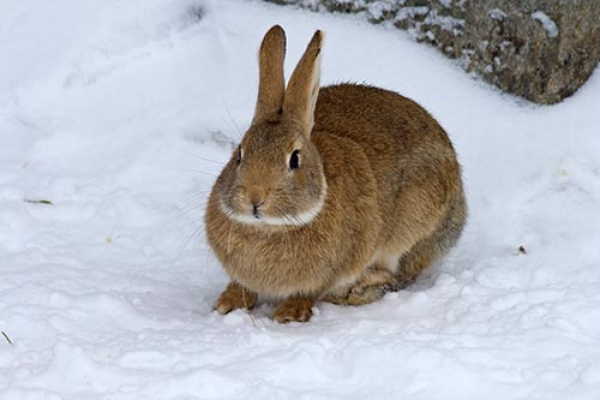 The wild rabbit's ear, with its blood vessels close to the surface, is an essential thermoregulator and may be an adaptation to improve hearing in a prey animal that must be alert to many threats. Though the domestic descendants of the European rabbit have been bred, in some cases, for lop ears, such drooping appendages have not been noted in the wild rabbit.

Since speed and agility are a rabbit's main defenses against predators (including the swift fox), rabbits have large hind leg bones and well developed musculature. Though plantigrade at rest, rabbits are on their toes while running, assuming a more digitigrade form. Unlike the paw structure of some other quadrupeds (including dogs and cats), rabbit paws lack pads. Rabbits use their strong nails for digging and (along with their teeth) for defense. Each front foot has four toes plus a dewclaw. Each hind foot has four toes (but no dewclaw).

Most wild rabbits (especially compared to hares) have relatively full, egg-shaped bodies. The soft coat of the wild rabbit is agouti in coloration (or, rarely, melanistic), which aids in camouflage. The tail of the rabbit (with the exception of the cottontail species) is dark on top and white below. Cottontails have white on the top of their tails.

As a result of the position of the eyes in its skull, the rabbit has a field of vision that encompasses nearly 360 degrees, with just a small blind spot at the bridge of the nose