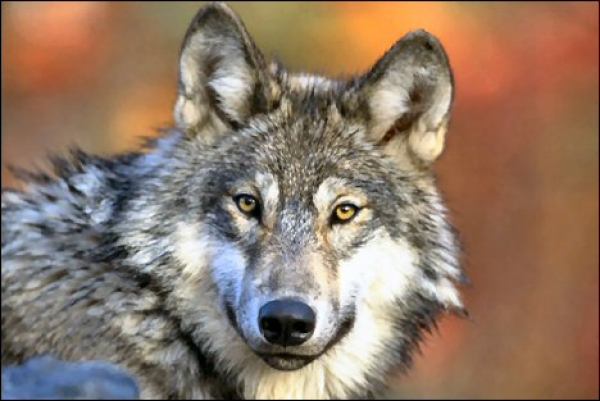 The European wolf's head is narrower, and tapers gradually to form the nose, which is produced on the same plane with the forehead. Its ears are higher and somewhat nearer to each other; their length exceeds the distance between the auditory opening and the eye. Its loins are more slender, its legs longer, feet narrower, and its tail is more thinly clothed with fur. The shorter ears, broader forehead, and thicker muzzle of the American Wolf.

The Eurasian wolf (Canis lupus lupus) is a subspecies of grey wolf native to Europe and the forest and steppe zones of the former Soviet Union. It was once widespread throughout Eurasia prior to the Middle Ages

It is the largest of Old World grey wolves, averaging 39 kg (86 lb) in Europe, however, exceptionally large individuals have weighed between 69–80 kg (152–176 lb), though this varies according to region. Its fur is relatively short and coarse, and is generally of a tawny colour, with white on the throat that barely extends to the cheeks.  The howl of the Eurasian wolf is much more protracted and melodious than that of North American grey wolf subspecies, whose howls are louder and have a stronger emphasis on the first syllable. The two are, however, mutually intelligible, as North American wolves have been recorded to respond to European-style howls made by biologists.

Many Eurasian wolf populations are forced to subsist largely on livestock and garbage in areas with dense human activity, though wild ungulates such as moose, red deer, roe deer and wild boar are still the most important food sources.