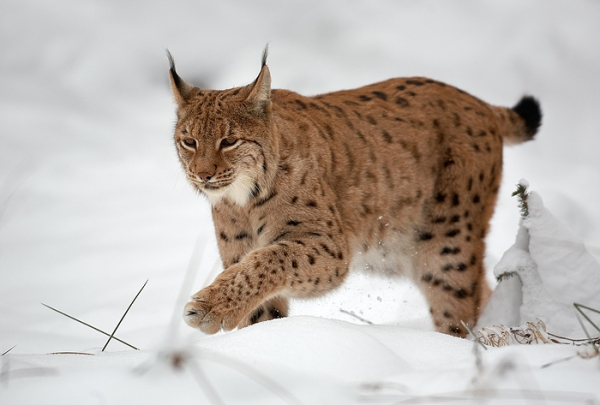 Langedrag have 9 lynx which lives in a large enclosure to maintain their natural needs.

During our guided tour at 14:00 at weekends and school holidays, you can see our lynx and be amazed at their agility.

During the summer, the Eurasian lynx has a relatively short, reddish or brown coat, which tends to be more brightly coloured in animals living at the southern end of its range. In winter, however, this is replaced by a much thicker coat of silky fur that varies from silver-grey to greyish brown. The underparts of the animal, including the neck and chin, are white at all times of the year. The fur is almost always marked with black spots, although the number and pattern of these are highly variable. Some animals also possess dark brown stripes on the forehead and back. Although spots tend to be more numerous in animals from southern populations, Eurasian lynx with heavily spotted fur may exist close to others with plain fur.

Eurasian lynx make a range of vocalizations, but are generally silent outside of the breeding season. They have been observed to mew, hiss, growl, and purr, and, like domestic cats, will "chatter" at prey that is just out of reach. Mating calls are much louder, consisting of deep growls in the male, and loud "meow"-like sounds in the female.

Eurasian lynx are secretive, and because the sounds they make are very quiet and seldom heard, their presence in an area may go unnoticed for years. Remnants of prey or tracks on snow are usually observed long before the animal is seen.